Previously, thyroid diseases, especially those characterized by an enlarged (enlarged) and overactive gland, could only be cured by surgical treatment with the help of thyroid surgical instrument set. 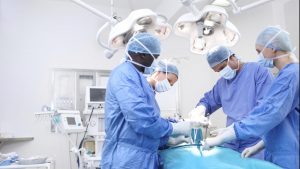 . In fact, the Nobel Prize in Medicine was awarded to Professor Theodore Kocher of Switzerland in 1906 for making thyroidectomy safe. Over the past 50 years, many medical discoveries about the thyroid have been made and these have led to a decrease in the need for surgical treatment. However, it remains an essential part of the management of many thyroid disorders, even today.

There are many types of thyroid enlargement or dysfunction, and patients with the condition must undergo the appropriate tests so that the correct diagnosis can be made. The tests are usually tests to assess thyroid function, nuclear medicine images of the thyroid, ultrasounds and, most importantly, fine needle biopsies of the gland. Depending on the test results and the patient’s history, the doctor may refer him to a surgeon who will determine if surgical treatment is appropriate and could be beneficial.

Surgical treatment is particularly indicated in patients with nodules considered to be cancerous, mainly detected by fine needle biopsy. Although a fine needle biopsy can detect cancerous tissue, it is mainly used to reveal “cellular” or “follicular” lesions suggestive of a tumor. Thus, even if the diagnosis supported by the biopsy is not strictly that of cancer, it does confirm the presence of lesions sufficiently suggestive of cancer to warrant surgical treatment.

Patients with an enlarged and overactive thyroid may need surgery. This is especially the case in patients with single or multiple nodules. Generally, patients with Graves’ disease do not need surgery, except perhaps those whose thyroid is severely enlarged or who have a single nodule considered cold on imaging or the rare patients whose the disease must be brought under control quickly. Those who also have significant ophthalmopathy and are unresponsive to antithyroid agents may also be referred for surgery since, in some cases, ocular damage is aggravated by administration of radioiodine.

Patients who have been exposed to irradiation of the head and neck may develop thyroid nodules which will require surgical removal, particularly due to a 30-60% incidence of thyroid cancer. In Canada, such radiation treatment was indicated for acne or tumor of the blood vessels in the skin of the face or, sometimes, “enlarged thymus”. Other patients have been exposed to radiation as part of the treatment for cancer or lymphoma of the head and neck.

Sometimes patients show such an enlargement that the thyroid gland puts pressure on the esophagus or trachea causing difficulty in swallowing and breathing and a feeling of tightness. A chest x-ray can confirm a deviation of the trachea by the enlarged thyroid. In such a case, surgery proves to be effective and could be the preferred therapeutic solution.

The course of the hospitalization

The patient who is to undergo thyroid surgery is usually admitted to the hospital after having undergone the relevant preoperative examinations, including a chest x-ray, an EKG, and various blood tests, including tests to assess thyroid function. The surgery is performed from a relatively short incision made in the lower neck in the center. The central muscles of the neck are pulled apart, and then the lobe of the thyroid gland is excised after careful dissection to preserve the superior and recurrent laryngeal nerves, which both end in the vocal cords, as well as the parathyroid glands, which balance blood levels and calcium in the body.

In some situations, such as mild illness, only a portion or half of the thyroid needs to be removed. The thyroid is made up of two symmetrical lobes. When both are enlarged or have a tumor or Graves’ disease, it may be necessary to remove most of the gland.

In case of cancer of the thyroid gland, the surgeon should check whether it has spread to lymph nodes in the neck. If so, they too will likely need to be excised using a surgical technique called “cervical lymph node dissection,” which results in minimal change in function and appearance. The incision made for the thyroidectomy may need to be lengthened laterally at the base of the neck to further expose its structures, making it easier to dissect.

Once the procedure is complete, the surgeon carefully sutures the incision. The patient is usually able to be discharged from hospital a day or two after the surgery. The stitches can be removed two days after the procedure. The patient should present to the surgeon’s office for follow-up one week after the thyroidectomy. Some establishments offer day surgery thyroidectomy. Slightly less invasive video-assisted surgical techniques are used in certain circumstances, usually in the presence of mild impairment.

Previous How to wear a long dress when you’re little?
Next Winter sales 2021: dates and tips for successful shopping